How to Take Care of Guppies in an Aquarium so that they Don’t die Easily. How to take care of guppy fish in an aquarium so they don’t die easily, caring for guppy fish is easy.

For this reason, this time we want to share about how to take care of guppies so they don’t die easily. 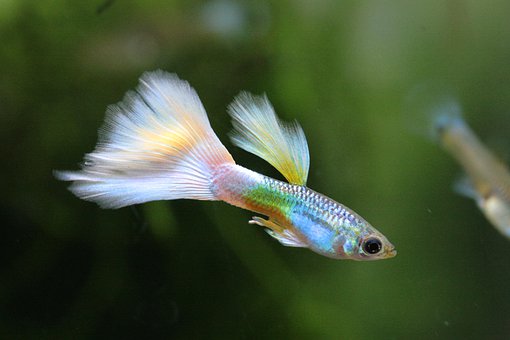 The price of guppy fish is cheap and has a variety of color variations and patterns are also another attraction.

Although maintenance is fairly easy, guppies are also vulnerable and die easily if you don’t take care of them properly.

Here’s How To Take Care Of Guppies In The Aquarium So That They Don’t Die Easily Before discussing further how to care for guppies in an aquarium, first you must know the origin, types, and characteristics of guppies.

How to Take Care Behind the Beauty, Cultivation and Business of Guppy Fish

Quoting from Fishkeeping World and various sources, this small freshwater fish comes from the waters of South America and belongs to the family Poeciliidae.

The guppy fish was claimed to have been first discovered by Robert John Lechmere Guppy in the Trinidad region in 1866 ago.

There are approximately 300 varieties of guppies worldwide based on their color, pattern, size, and tail shape.

But in general, there are three species of guppies that are easy and widely maintained

Guppies have many nicknames, such as “million fish” because of their fast breeding ability and “rainbow fish” because they offer a wide range of color choices.

A type of freshwater fish that has a calm and non-aggressive temperament. Guppies are small freshwater fish species ranging from 1.5-3.5 cm for males and 3-6 cm for females.

It is quite common to be kept in large numbers and live in groups.

This is also supported by the relatively affordable price of guppies, although it depends on the type.

How to Take Care of Guppies in an Aquarium So They Don’t Die Quickly In addition to being kept in an aquarium with other types of fish, small guppies are also suitable to be kept in an aquascape.

This fish also functions as an aquarium cleaning fish, because it can eat and clean the algae attached to the aquarium

Unfortunately, even though they are easy to care for, guppies are also prone to death due to an unsuitable aquarium environment, disease, or attack by other fish that live with them.

How to properly care for guppies

1. Pay attention to the condition of the aquarium Guppies have a natural habitat in freshwater waters in South America, with a tropical climate.

Make sure the aquarium conditions are suitable and as comfortable as possible while providing live plants, rocks, and substrate as a base because the majority of guppies swim in the middle to near the surface of the aquarium water.

In addition to conditions, also pay attention to the aquarium temperature for guppies with water temperatures ranging from 24-28 degrees Celsius.

The pH level of the water for guppies is between 5.5-8.5pH, but ideally between 7.0-7.2 and equip the aquarium with a filter and aerator.

Getting to Know Some Investment Instruments Want to Profit or Lose

This aims to ensure that the dirt can be filtered properly and provide oxygen in the aquarium to prevent the emergence of harmful bacteria.

2. Pay attention to the type of fish

Male guppies have more attractive color patterns than females and are suitable to be kept as aquarium decorations.

Guppies are generally also kept in groups with several other fish in the aquarium.

Guppies have a calm temperament and can be mixed with other types of freshwater ornamental fish such as mollies, goldfish, red discus fish, corydoras, angel fish, pearl sepat fish and neon tetras.

Avoid aggressive and large ornamental fish, such as Oscar fish or arowana fish, because they can cause guppies to be attacked and even become soft food for them.

Guppies are classified as omnivorous fish, wild guppy fish food can be in the form of algae, mosquito larvae, water fleas, worms, and so on.

As a pet ornamental fish, you need to choose the best guppy fish food such as fish pellets and other alternative foods to meet nutritional needs.

Guppy fish food intake is given once or twice a day Feed them as needed or in a dose they can finish in two minutes.

Also provide a variety of foods other than fish pellets, such as mosquito larvae, frozen worms, or small pieces of vegetables.

Pick up leftovers if you find leftovers using the net.

Also, don’t forget to clean it, if you don’t clean it, food residue can settle in the aquarium and potentially cause health problems for the fish.

4. Pay Attention to Diseases and Other Health Problems

Watch for Diseases and other Health Problems and know the characteristics of guppies when they are stressed or experiencing illness and health problems.

Guppies are generally also susceptible to stress or illness and exhibit hiding behavior and do not swim freely as usual.

Perform maintenance and replacement of aquarium water properly and regularly

Provide varied food; and limit the fish population in the aquarium so as not to overdo it.

The ease with which guppy fish breed certainly opens up business opportunities, one of which is cultivating guppy fish using buckets or other media.

Before cultivating guppy fish, you should know how to distinguish male and female guppies in choosing a good broodstock.

In general, male guppies are small with bright, contrasting colors. While female guppy fish are larger, rounded with colors that tend to be less bright.

Prepare four different containers as a place to separate the broodstock, a spawning area, a hatchery, and a nursery.

Next, do the spawning process by placing male and female guppies in a ratio of 1:5 or 2:5 in a special container. This process usually takes approximately 4-7 days.

After that the female fish that have been successfully fertilized immediately move to the hatchery and make sure the hatchery has clean water quality and is aerated.

This guppy fish is an ovoviviparous fish that lays eggs and gives birth.

Guppy fish eggs hatch in the mother’s body and only come out after.

Next, nurse the guppy fish in an open container and get enough sunlight.

Give water hyacinth plants and adjust food intake according to the age of the fish.

Nursery until the age of 20 days, at which point the sex of the guppies can be determined.

Many beginner guppy fish lovers are confused about why their guppies often die in the aquarium Poor water quality is the strongest reason why guppies die because of dirty water quality.

For this reason, feed guppy fish properly and regularly and keep it clean even though guppies also excrete dirt that can pollute the water quality in the aquarium.

The presence of ammonia makes the starter bacteria convert ammonia into nitrite and then into nitrate.

If left alone, the ammonia level continues to rise so that it can cause death in guppies

Keeping too many guppies, this problem is usually referred to as overpopulation.

Guppies are one of the fish that have a high reproductive rate. In one month, female guppies can hatch about 20-120 tails.

That’s our little review of How to Take Care of Guppy Fish in an Aquarium So That It Doesn’t Die Easily. Hope it is useful.