Home / info / Here it is, Several types of Ornamental Fish, Beautiful and Easy to Care for

Here it is, Several types of Ornamental Fish, Beautiful and Easy to Care for, Are you one of the people who like or hobby to keep fish?

In addition to dogs and cats, ornamental fish have also become prima donna animals which are quite popular and are used as pets at home.

Some people, many make ornamental fish as pets that can beautify the home atmosphere more beautiful and pleasing to our eyes 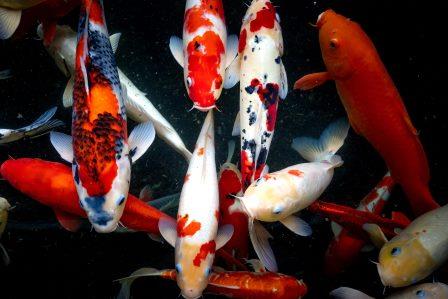 There are many types of ornamental fish scattered all over the world. Starting from small, medium, large fish, and has a variety of beautiful colors.

Usually keeping ornamental fish in the house is placed in an aquarium with various shapes and placed on the side of the house.

However, there are also those who keep ornamental fish in fish ponds, indoors and outdoors.

This guppy fish is one type of ornamental fish that is quite popular. Guppies are native to South America.

Guppies have a body shape like a woman wearing a skirt. The shape is attractive and has a size of less than 2.5 cm, when measured from head to tail.

Guppies are fish that are easy to adapt to various environments and are widely distributed throughout the world.

Betta fish is one of the most popular ornamental fish in Indonesia. This fish is very easy to find because many fish sellers sell betta fish. In fact, there are many itinerant betta fish sellers that you can sometimes find on the roadside or in front of schools.

Betta fish are small fish with a size of about 2.5 cm and can grow up to 12.5 cm. This fish is very unique because it can breathe air that is not in the water by using its organs called a maze. The care and methods of cultivating betta fish are quite easy to make many people cultivate them.

Molly fish are often also called balloon fish because most molly fish have a distended stomach and a round body.

Here are the types of Betta Fish, Varied with Fantastic Prices

This type of ornamental fish is very suitable to be used as aquarium ornamental fish because its adaptive and ‘peace-loving’ nature makes molly fish safe when mixed with other types of fish. In addition, the price of molly fish is also very pocket-friendly, which is less than Rp. 5,000 per head.

Platy fish have a small body shape and have many types. Its small size and ‘peace-loving’ nature, make many people choose this fish to be an option to be kept in an aquarium.

In addition, this type of ornamental fish is very easy to adapt to its new environment and is also quite immune from disease attacks. The price of platy fish is also very cheap, which is only around Rp. 1,000 to 2,000.

Goldfish is a type of ornamental fish that is popular among ornamental fish lovers. This fish has the characteristics of a distended belly and a bright and beautiful color that makes many people like it.

Although the goldfish is a fairly popular ornamental fish, this fish still has a fairly affordable price, which is around Rp. 10,000 to tens of thousands per fish. Even so, there are also types of goldfish that reach hundreds of thousands of prices, depending on the type and age

One type of ornamental fish that is popular from time to time is the koi fish. Koi fish were first introduced to Japan in the 1920s. Koi fish are the result of crossing several types of goldfish with white and red colors.

This type of ornamental fish is very popular among aquarium ornamental fish lovers. However, usually people keep these koi fish in ponds. Koi fish can grow to large sizes and usually have very pretty colors which can make them very expensive to trade.

Comet fish are almost similar to goldfish and goldfish. This type of ornamental fish is often called slayer fish because the shape of the fins and tail of this fish is like a slayer. Comet fish also have a very beautiful color.

Comet fish which has the Latin name Carrassius auratus. Having a slender body with shiny silver, white and bright red colors and a long tail that waves when swimming makes ornamental fish lovers hunt for this fish. For the price, comet fish are usually sold at Rp. 5,000 to Rp. 60,000 per head.

Neon Tetra fish come from Latin America, precisely in the Amazon River. This fish has variations of bright blue and silver white that adorn its small body. This fish is more attractive to be kept in large numbers because of its colonizing or forming groups.

Manfish is a type of ornamental fish that belongs to the Chiclidae family. This fish has a beautiful but elegant color. These fish usually eat food such as mosquito larvae, tubifex worms or chironomous.

Lemon fish is so named because it has a bright yellow color like a lemon. This fish looks very beautiful with the striking yellow color combined with the black color at the tip of the upper fin.

Those are some types of ornamental fish, beautiful and easy to maintain. Hope these informations are helpful for all of us.